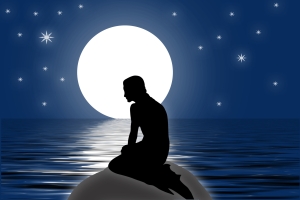 The midwife hurried through a cold, foggy night. She came with an empty stomach, because a family who lived in the sailors’ district could hardly be expected to offer more than dinner as payment. She would roll her eyes, say she could think better with food in her belly, and food she would get. It was always better when there were already children in the house with older girls who could tend to a good meal, but it would have to do.
It will have to do, she mumbled to herself as she knocked at the door. A woman’s shrill cry cut the thick air. The midwife pushed the door open. It looked like dinner would have to wait.
An old sailor, sea-battered and red faced, held his young wife around the shoulders. He wore a red coat and she was in a white nightgown. It seemed to the midwife more like a murder scene than a birth.
“What are you doing to that poor girl,” the midwife cried.
“She will not stay in the bed. She says she wants to have the baby in the waves.”
The midwife looked out the tiny cottage window. Beyond were the cliffs, and the sea below. None of that could be seen through the fog. The midwife shook her head. “She will catch her death down there. And people would talk.”
The young woman moaned.
“Don’t worry love,” said the midwife. She stepped forward into the firelight. The mother to be was hardly more than a child. “We will not take you to the sea,” she whispered to the girl, “but there cannot be anything wrong with bringing a bit of the sea to you.” She turned to the husband. “Take a bucket down to the beach and fill it with water.”
“She will flee if I let her go.”
“She will die if she tries to fight you and birth at the same time.” The midwife looked the girl in the eye. “Will you stay if we bring you a bit of the sea?” The girl’s shoulders sagged. She nodded once, very slowly.
It was not the way things were done, the midwife thought, but if it settled the mother and gave the husband something to do…what could it hurt?
What could it hurt?
It was a quick and easy birth after that. The mother delivered a beautiful baby boy with jet black hair.
“He looks just like you,” the midwife cooed as she laid the babe on his mother’s chest.
“That is what I was afraid of.” The mother sighed.
“You are young, with a good birth and a healthy baby. There is nothing in the world to be afraid of.”
The mother sighed again.
The midwife sent the husband out to register the new child at the church while she tidied the room and waited for the afterbirth. She waited and waited, but nothing came.
“Maybe he is human after all,” the new mother murmured as she stroked the baby’s cheek.
“Of course he is a human baby,” the midwife tisked. A tired new mother might say strange things now and then, the midwife assured herself.
The mother jerked forward. The baby cried. The midwife took up the mess.
Except it was not a mess at all. It was a skin, soft and sleek and as silver as the moon. This was not right. Not right at all. The midwife took it to the fire. It was an unnatural thing, and it would be better to destroy it. She threw it on top of the flames.
“It cannot be destroyed,” the mother groaned from the bed. “Take it out with the tongs and drop it in the bucket of sea water. When you leave here, take it with you. Throw it over the cliffs, out into the waves.”
The midwife stood her ground. She crossed her arms and left the thing in the flames, but the mother was right, it did not catch fire.
“You should do as I say.” The mother’s voice was stronger this time, and carried an authority that belied her years. “There will be bad luck if you do not, for you and for your men. There are unseen things out beyond the waves that can take the fish from the nets. They can empty the cages. You do not want to be responsible.”
Oh, how the midwife wished she had never come to that house. She did not want their dinner. She did not want anything to do with these otherworldly things. Things one heard about in whispers. Things that lurked in fog and foam. She pulled the mass of silver from the flames, dropped it in the bucket and ran to the cliffs as fast as she could. She flung it far into the water. She made the sign of the cross. She made the pagan sign against the evil eye, the one her grandmother used to make. She tried to remove the notion from her mind of that beautiful baby boy with the jet black hair.
The next morning the fog lifted. It was unusually bright and sunny. The midwife looked out her window. She saw the husband in his bright, red coat walk down to the docks. He stepped onto a ship. He wore something strapped to his back. That something was topped with a tuft of jet black hair. The mother was nowhere to be seen.
Again, the midwife could not stop thinking of that boy. He would need praying for, if anyone ever did. The midwife went to the church and asked the priest to open the large dusty ledger that recorded all births and deaths. She told him to point to the name he had added the day before, and then to read that name. The priest lifted his thick finger from the spot. He read the name.
“Samuel.”

6 thoughts on “Part One: The Story of the Birth of the King of Pirates”