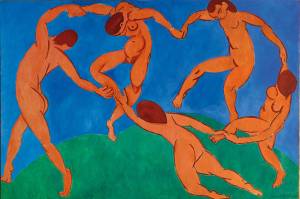 During my last visit to New York, I had the chance to wander through the exhibit Matisse: In Search of True Painting at the Metropolitan Museum of Art. I have always been inspired by the sensual, abundant work of Matisse.

As I walked through the exhibit, I began to wonder what his process as a painter could teach me about writing. If I am drawn to the way Matisse paints, what can his method and craft teach me about my own?

Matisse was often praised for the ease and fluidity of his art. In truth, painting was far from an easy process for him. He often reworked entire paintings many times over and used older works to generate new ideas. In later years, he hired a professional photographer to document his process so that he could analyze if he had gone off track or made progress with his work. He played with details, such as the curve of a woman’s back or her placement beside a stream.

I think that in writing terms, this is the beauty and sacred promise of editing. If I start to edit the first time I enter the blank page, I lose my flow. When I remind myself that it can always change and grow, that first inspiration is only one step on a very tall adventure, I believe that is the gem of Matisse and his process. After the initial impulse has been fully laid out, I can come back to rediscover and play with the structure and message it is meant to convey.

Craft is the act of honing an image, a word, a sentence, a movement until we have found something that shares an experience with others. To interrupt that first impulse with our own judgments is as negative and shortsighted as sending our work into the world completely unedited. Right in the middle of the two, there is the stuff creation is made of. Every time we touch and move a new piece, we are coming back in contact with something that is, in the very least, the wondrous collection of our own rich inner lives.

What Matisse taught me about writing is that I must allow myself time to be wrong. To be wrong as I first put words on the page. To make mistakes as I go through the editing process. To discover what happens when I change the pace or repeat a word or take something out. Matisse was so confident in this process of exploration he even paid to document his successes and failures with a professional photographer!

For all artists, the search for truth can be as inspiring as the first impulse and the finished work that bookend the making of a story.

Thanks to Matisse. He already said it so much better.

19 thoughts on “What Matisse Taught Me About Writing”