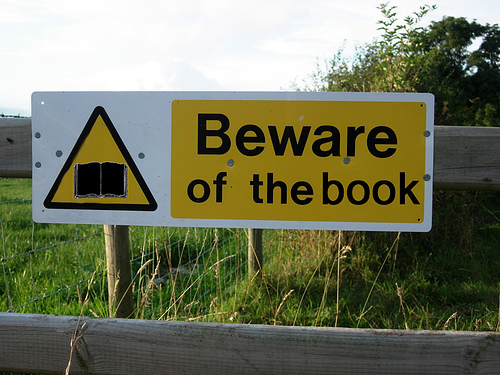 Following is my interview with my friend and local librarian Molly Senechal about the issue of banning or removing certain books from a community. I had intended to weave my conversation with her into a much larger piece, but her words are too well said. No need for any further decoration.

I grew up in Bakersfield, CA, the epicenter for the controversy over The Grapes of Wrath. Even forty years after the book was published, there were still strong feelings over the decision to remove the book from the Kern County Library. As a writer, I know how hard it is to be criticized, to feel I’ve made the offering of a great and perfect gift no one else can see. I have some sympathy for the people in the Bakersfield community who felt John Steinbeck overlooked the good California did for migrant workers. What fires me up, and what interests me from the perspective of a storyteller, is the choice to hide rather than discuss the shortcomings of a story. These are the moments I find so compelling in life! And now…Molly Senechal:

What is your definition of censorship? How have your personal experiences shaped that definition?

I believe censorship is the act of impeding or blocking access to words, stories, music, art, and/or ideas. As far as personal experiences involving censorship go, I have only one: In the early 1980s, the rock band KISS was playing in my hometown. My older brother had tickets to the concert, and our mother forbade him to go. She had heard stories about the band worshipping phallic symbols and other such things. Whether the stories were true, I can’t say. My brother was furious, of course.

Do you think controversy surrounding a book creates more interest, curiosity, or readership?

Controversy surrounding books definitely creates interest. The hubbub over the 50 Shades trilogy by E.L. James is a great example. (See? I’m creating even more interest just by mentioning it here! But that’s because it is a great example of controversy and curiosity.) There are some public libraries that aren’t carrying the series because of its theme and content. People want to know what the big deal is. What’s drawing folks to the book? What’s repelling them? Will they feel the same about the series as their friend (or sister or neighbor or whoever)?

Controversy over a book can be a very beneficial thing. Think about it: You read a book you love, hate or don’t fully understand and you want to “review” it for anyone who will listen — and hear their review(s), too. Heated discussions can even encourage people to read books they might not otherwise touch. I didn’t care for Twilight, but struggling through it inspired me to pick up the granddaddy of all vampire novels: Dracula (which, by the way, I loved).

In a perfect world, how would controversy over a book be handled?

In a perfect world, there would be no controversy over books! Discussion, yes. Debate, yes. Pulling a book from a shelf, no. But since we don’t live in a perfect world, controversy over any art (literary, musical, visual) would best be handled by we, as humans, becoming comfortable with any topic. I really think people censor, or shy away from discussion, because they’re afraid. They’re afraid because they don’t have all the answers, or because they might have to question their beliefs or value systems. Digging deeply into your own mind can be a scary business.

Other thoughts (related to censorship, though perhaps loosely):

Our thoughts are the only things we can control. They are wholly, completely ours. They cannot be restrained, arrested, or withheld. If it’s true that humans are the only animals capable of “higher thought”, why would we limit ourselves by censoring? Why would we limit others’ ideas and ideals? If fear is our motivation (see above), then we need to be braver!

“Ideas don’t die because a book is forbidden reading.” -Kern County librarian Gretchen Knief on the burning of The Grapes of Wrath

4 thoughts on “Censorship…The stories we hide”