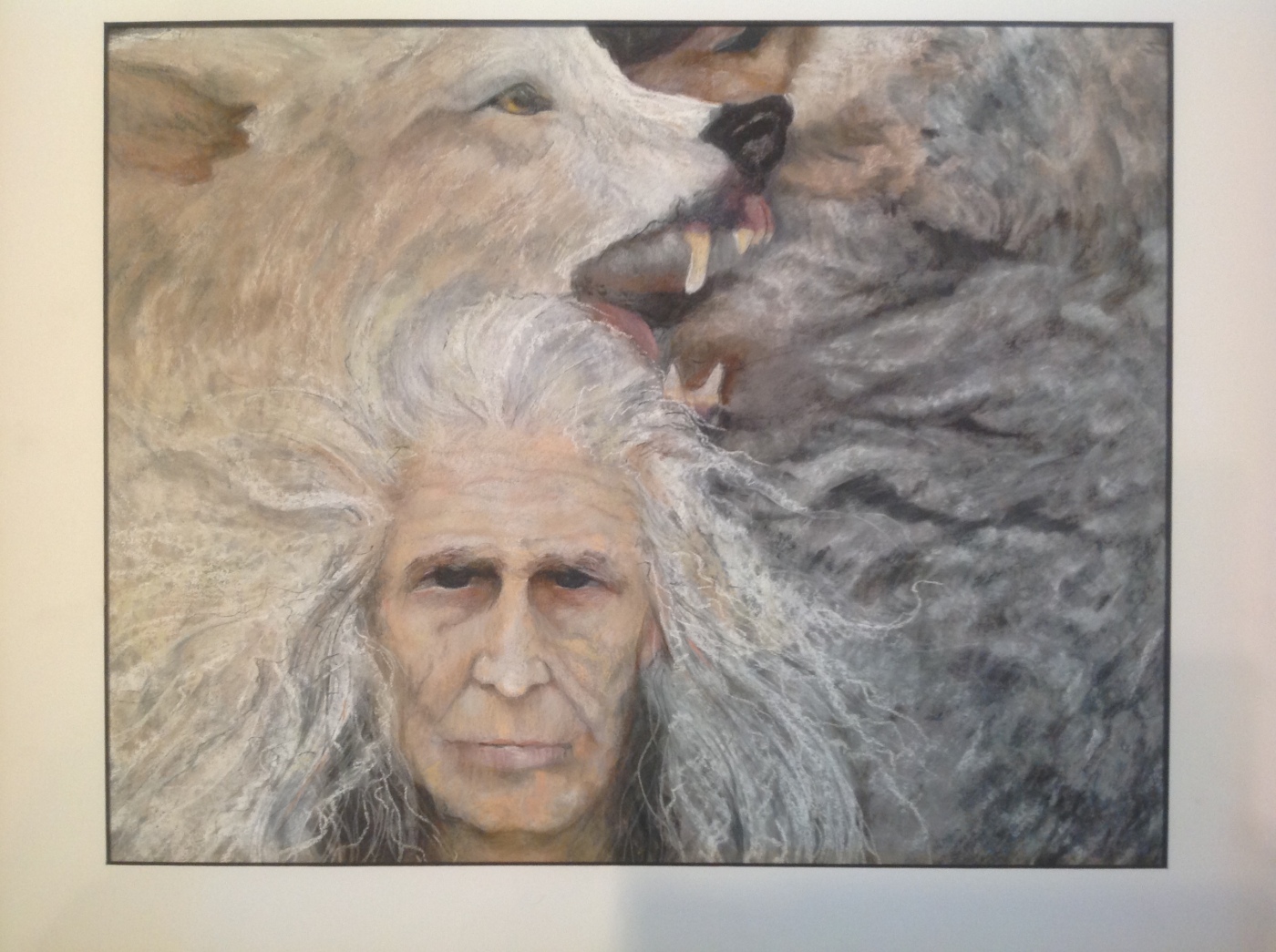 Grandmother knelt in front of her loom by the fire. Her fingers danced across the strings like a harpist. A beautiful pattern grew into a tapestry from nothing more than the tidy balls of colorful yarn beside her. She came to the end of a white strand and worked in a thread of black until I couldn’t see where one began and the other ended.

A log caved in two, and the orange flames of the fire leapt higher. The light caught the age marks of my grandmother’s hands. I turned away to look out the window. Was my life destined to be like her life…endless work until I was too old to wonder anymore?

Her house perched on the ridge of a mountain as solitary and stubborn as she was. Only the moon could climb higher than grandmother’s house, and that night it hung silver and round and pregnant with possibilities. Below the window was a thick forest of evergreen trees and beyond that a bog. The bog was usually wrapped in a thick mist, but that night everything was clear. The land lay barren and unprotected, vulnerable as a secret in an open palm. I thought if I were a decent sort of person I’d look away, but I couldn’t.

On that night, in that brazen circle of moonlight, a woman appeared from the forest and into the bog with her hair wild and silver in the wind. Two wolves loped behind her. One was white and the other black. If they followed her or chased her, I couldn’t tell. The wolves stopped at the edge of the tree line and took up a fight. The woman dropped to her hands and knees and clawed the dark earth with the her bare hands. The wolves rolled and bit until they fell into the bog in a patch of black and white as seamless as grandmother’s weaving. The woman took no notice. She left the hole she’d dug and crawled forward to start another.

“Ach,” Grandmother kept her weaving in and out in steady rhythm. “The moon is full and you’ve grown old enough to see the world as it truly is. I’ll wager you’ve caught your first glimpse of the bog woman.”

“Where does she come from?”

The wind moaned. The wolves howled. I felt the chill of the night move across my skin.

Grandmother took a ball of yarn from floor and weighed it in her withered hand. The yarn was as dark and rich as the peat soil of the bog. “That answer is buried in the past, all the way down to the first women who ever lived and loved and wished she was better than she’d been.”

Grandmother cut her dark yarn and took up a line of red.“Long ago, my grandmother told me the bog woman used to meet a man out there at the edge of the forest. It has always been a clandestine spot. When he was young, that man had found a bag of gold on a bench in the courtyard of the market. It had a name on it, but instead of finding the owner, he concealed it in his pocket. On his way home, he saw the hat maker. A hat! He’d never bought a hat before. He’d never needed one.

“The thrill of the purchase made the trees greener, the sky bluer. For a moment in time, he was full of a power he’d never known before. He told the hat maker that his father had sent him to pick it out, because he would need it for a journey they would take together. He wasn’t going anywhere with his father, of course. In fact, the hat would never be any use to him at all. If he ever wore it, his parents would know he hadn’t come by it honestly. When he got home, he hid it under his bed.

“That silly, stolen hat tormented him. Every time there was a knock at the door, he was sure it was the owner of the gold come to tell his parents what he’d done. The shame of his parents knowing his wrong doing frightened him where the theft had not. He buried the hat and the empty bag in the bog like dead men. Even when it was lost in the earth, he feared the owner of the bag would find him and give him away. He’d not minded being a thief, but he couldn’t stand to be known as one.”

Grandmother ran the shuttle through her tapestry. “Of course one day the man left the woman in the bog too. He married a wealthy girl and never returned, but a stolen heart can’t be left behind as easily as a hat. Whatever became of the man, I’m sure he met his fate. The woman stayed in the bog ever since, digging for the lost burdens of someone else’s shame. While she digs, her wolves fight untended.”

“Are those wolves good or evil?” I asked. They both looked wild and dangerous.

“Neither. Everyone lives with their own two wolves, but the rest of us keep them hidden inside. One wolf is called Forgiveness.The other is Fear. Our wolves must fight to the death.”

The woman was bent and old and desperate, but I still saw the beauty in her. If she could find solace from such a battle, certainly I could too.

“Which wolf will win?” I asked.

“That’s her choice. “Grandmother tied a knot at the end of her work. “It will depend on which wolf she feeds.”