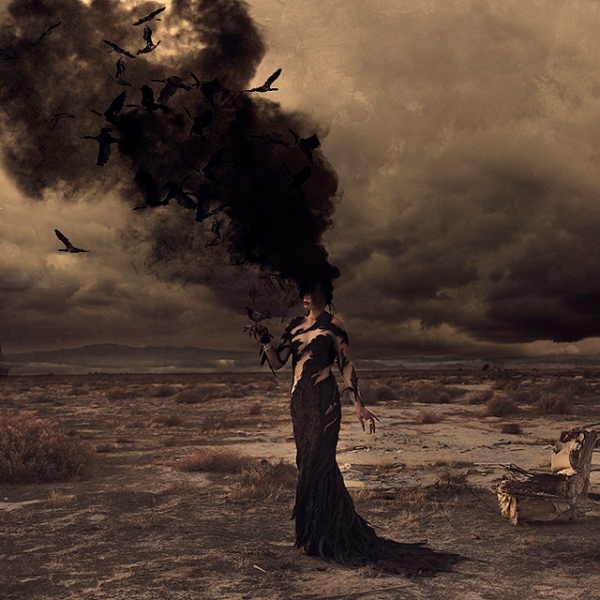 Evelyn stood at the mouth of the cave. The lost warmth of the warrior’s hands, his body, his voice, his heart, that absence left an emptiness. She could feel it like a man might lose his arm in battle but still complain he felt pain in his fingertips. Nothing remained but a fire that dwindled to ash, and the thick forest she had come from. Beyond was the path that led to her village, to rows of houses but not homes. To dresses and shoes that waited in her abandoned closet, but they would not fit her anymore, or she would not fit inside of them.

She wandered through the arc of trees, which had become full of green and bird-song. Hope whispered on the wind. It was impossible to stay sad while the sun danced through the leaves and left a delicate pattern on the path ahead of her. Like life and love and time. They trace their shadowy impressions on the heart too, but they can’t do so without the light.

“Oh, how I wish I could share this with you right now.” She closed her eyes and tried to always remember that moment.

A breeze lifted her hair and smoothed it from her face the way her warrior once had.

Evelyn came to the other side of the woods, to the place she had entered frightened and burning with life on that first winter night. It seemed not only a season ago, but a lifetime of seasons since she had sought out the mysteries of the forest. Slowly, she put one foot outside the last row of trees, and let it rest in a world that had once been hers. She didn’t belong there anymore. She turned back to the path. Winter would return again, and maybe her warrior would too. She could go to the cave. She could wait.

A lone, gray wolf stood in the path. Each time she tried to take a step forward, he lowered his head, pushed back his ears and growled. Even with the wolf ahead of her, the road back to the village was a kind of death too. She stood straddled between her two pasts until night fell.

The moon rose round and full, and its light spread until it fell over the wolf. He leapt away and disappeared into the dark forest.  Evelyn ran as fast as she could down in the direction she thought would take her back to the cave. Nothing was familiar. Everything seemed changed. She came to a place she didn’t remember, where the path forked in two directions. Neither seemed right. In the center, a gnarled tree twisted up from the ground. Evelyn was too tired to decide which choice to make. She threw herself down in front of the tree and rested her head against the trunk.

“I am lost.” But what am I really looking for, she wondered.

“Alms for the poor?” Croaked a voice from above her.

“Alms for the poor?” The old woman reached out an arthritic hand.

Evelyn had lived too long with the magic that hummed through the forest to let fear run cold through her body. She reached into her cloak and pulled out her last pouch of dried seeds and fruit. “Here you are, Vala.”

“I have lived in these woods for many months with a young warrior who runs with the wolves and disappears with the ravens. I have survived with nothing more than these seeds and the clothes on my back. There is no such thing as poor here. You asked only to test my generosity.”

“Ah, well, you do have a wise mind and a generous heart. Tell me, do your mind and your heart hold the same desire?”

The old woman worked her ancient tongue over her toothless gums. “No. Your heart wishes to love him, and your mind wishes to possess him. It is one kind of generosity to offer your food to a stranger. It is a far greater generosity to offer freedom to the one you love.” She placed her chill, twig-like fingers on the top of Evelyn’s head. “You won’t find your home or your story on this path anymore. Do not linger here.”

“But I can’t go back to the village. I’m not the girl I was any longer.”

“Then go forward into what you are becoming. Not every fire was meant for warmth and the discovery of another soul. Some fires are lit ahead of us, to guide us where we need to be to discover ourselves. There is a child in your belly now, and she is a part of your true destiny. Raise her to know how to tend the hearth and wield a sword with equal strength.”

“In exchange for your seeds, I will show you where to start.” The old woman pointed down the path to the right. “Go forward this way, and do not get lost in the past again, My Child.”

The gray wolf leapt down the path and disappeared into the shadows.

Evelyn looked back at the old woman. There was nothing but a bent tree with a knotted branch that pointed to the darkness of the right hand path. She pushed through branches and tripped over logs until she came to a clearing. Above her in the Heavens blazed the greatest fire she had ever seen. The young warrior danced through the sky around it, leaving trails of deep red and indigo and violet wherever he went.

The night grew bright with his dance.

She made her home in that clearing, and there she had a daughter. The mother of us all. She taught her daughter to fight and weave with equal craft. Since that time, our ancestors have lived only where the Northern Lights can guide them to the place of their own stories and then, in the end, the lights call us forward to our greatest adventure of all…to the Beyond North.

Read part one here: The Northern Lights, Part One: The Wolf

Oh, hey there, Guinevere
Hey, friend of mine
Imagine running into you like this
your letter fresh in my pocket
Unanswered and waiting
Naïve and wise
I was going to write
I’d have written so well
but I’ve been so busy
Didn’t you hear?
I’ve gone on a quest
I’m finding the Holy Grail

Lancelot, don’t
Don’t stand so near me
We can’t collide anymore
I never knew you at all
I knew you like I shouldn’t
How you shed your clothes
The first time I asked
And I saw what you thought of me
Alive and real and unmasked
But now my words
My heart
Hidden there in your pocket
Exposing the colors
The me I think I am
I showed you mine
But you won’t give me a peek
Not of your heart
You won’t undress that far

Hey, friend,
said Lancelot
Don’t think it doesn’t matter
But my silence is the kinder story
Than a lie about the contents of my heart
A heart I hardly know

Don’t mind me,
said Guinevere
Don’t stand there watching, Lancelot
I’m just falling
One foot in front of the other
Like learning
Like walking
And Baby, a woman
She can walk all night
Until she comes to that morning light
Where the sky grows soft
and the pillars sleek
That man-made building between her streets
How it can touch her sky
and make her breathe
I know you know that feeling
You have shown me

But I was falling from the start, Lancelot
When my sins came spilling
All at once into your lap
And you said…
I’d have asked you anyway

My god, I thought
Here he is
A man who can make me breathe
A man who will take me as I am
I fell
One foot in front of the other
Until you found me here

Oh, Guinevere
My friend
Where is that woman I held?
Wild and impetuous and free
You will run me off with girlish fear
Don’t look for my white horse now
I’ll still make you breathe
We’ll find some other convenient time

I’m late, said Lancelot
I’ve got a grail to chase

Sometimes, a man
He comes up empty handed
Nothing to hold but his own manhood
When a Guinevere happens by
A woman to fill with his empty time
That sacred gift
That faith for free
Consecrated at her private alter
Isn’t that what holy means?
And isn’t she a vessel?
Isn’t she that grail?
Hidden there in plain sight
Right in front of him

But, Lancelot
He turned away
Sometimes, a man
He’s out for the quest
He looks around another corner

Sometimes, a woman
She swallows regret for her pride
She learns to offer the final empty lie
I’ll see you later
Guinevere called after Lancelot
When she really meant goodbye